We introduced a new category to the Oxfordshire Apprenticeship Awards this year - the Shining Star Award – the aim of which was to recognise someone who has made outstanding progress in their career since completing their first Apprenticeship and has the potential to achieve even more.

The inaugural award was won by Adam Barrett, who completed a Technical Highways Apprenticeship with Oxfordshire County Council (OCC) in 2015.

After completing his Apprenticeship, Adam successfully applied for a position in the Road Agreements Team, where he still works. His career has gone from strength to strength and he has been promoted from technician to engineer. He has also continued to progress academically, completing both a BTEC and HNC before starting a degree in Civil Engineering with The Open University in October 2018.

Not only has Adam been active in his own development, he has also happily given his time and expertise to encourage and support others. He has provided information and advice to help promote Apprenticeships as a whole and OCC as an employer, he has attended talks at schools and colleges to inspire young people in the field of engineering and he has been a fantastic mentor to the technician in his team.

The Shining Star Award was sponsored by Integration Technology Ltd, a pioneering designer and developer of ultra-violet (UV) curing solutions for ink jet printing, as well as other emerging technologies. Chief Executive Officer Adrian Lockwood said: “Adam Barrett was a clear winner, speaking with so much clarity and passion yet with surprising humility. He helps support and mentor a team of 6 current Apprentices, he has completed and very successfully passed a BTEC and HNC since completing his initial Apprenticeship and is now studying a full degree with the OU. He is strongly endorsed by his employer (“he is a key member of the team and an absolute asset”) and finally has been actively involved in attending talks at schools and colleges.”

Adam said: “I am so proud to have received this recognition. Being an Apprentice was rewarding in itself, let alone being recognised across Oxfordshire for it and everything I’ve achieved since. Everyone that I’ve worked with over the last six years had input into this award and I am so thankful for all the opportunities I have been given. Just to have been nominated was an incredible achievement for me but to win means so so much. And to work for Oxfordshire County Council who also won large Apprentice employer of the year is such a privilege. Apprenticeships are so valuable and so worthwhile and I am elated that it is finally being recognised!”

Adam’s manager Michelle Plowman also started her career as an Apprentice and has progressed to Principal Engineer since completing her Apprenticeship in 2007. She says: “I am immensely proud of Adam, his passion to succeed and the way he constantly strives to develop and grow. He is an inspiration to engineers and a success story for Oxfordshire County Council. In Adam’s day job he independently project manages multiple development schemes within Oxfordshire. He manages to juggle a high-pressured workload and a degree course but applies himself fully for each. There isn’t one specific scheme or achievement that I want to nominate Adam for, it is his cumulative successes and achievements and he is certainly destined for even more greatness!”

Read more about Adam in this case study on the Oxfordshire County Council website.

See our article for details of all the winning and highly commended entrants. 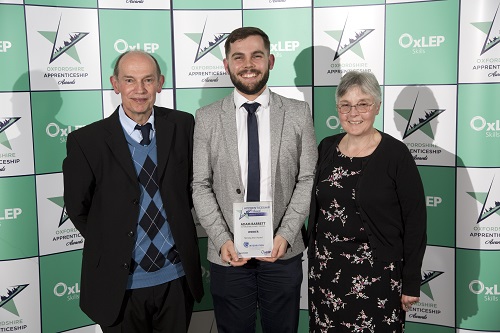