The University of Oxford offers some amazing science and engineering Apprenticeships across its many fascinating and historic departments. These are sought after opportunities offering a fantastic route into a STEM (science, technology, engineering and maths) career and typically receive a large number of applications. The Dunn School of Pathology advertised an Electrical Engineering Apprenticeship vacancy earlier this year and, although they received lots of applications, were surprised and disappointed that none of the applicants were female.

HR Manager Frances Wright decided to hold a STEM careers event for young women at the Dunn School to inspire female students to consider a career in the field and show them why it’s not just for boys! She worked in partnership with Oxfordshire Apprenticeships and University of Oxford Apprenticeships Manager Clive Shepherd to organise an open evening for girls in years 11 to 13 on 14th December.

There was a fantastic response from young women across the county, with around 40 attending the event. They had the opportunity to hear from some inspirational female scientists who started their career at the University of Oxford. This included a talk from Ana Clark, a 2nd year DPhil student, about the ground-breaking work on penicillin that was carried out at the Dunn School of Pathology and what it’s like to study as a postgraduate with the University of Oxford.

The girls also heard from our Apprenticeship Ambassador Sophie Jamieson, a former Lab Technician Apprentice at the Nuffield Department of Medicine’s Jenner Institute, who told them about her experiences as a University of Oxford Apprentice and how she is now studying towards a degree in biomedical science having completed her Apprenticeship.

The young women got to find out just how ‘cool’ science can be when they had the chance to get hands on with some cryogenically frozen flowers! The process is used to preserve stem cells - very fitting for a STEM careers evening!

This was also a unique opportunity to see inside a building that has played a significant role in the development of modern day medicine, including demonstrating the therapeutic value of penicillin. Its research programme today includes the cellular and molecular biology of pathogens, the immune response, cancer and cardiovascular disease.

Millie Chick, in year 11 at Faringdon Community College (pictured below), attended the event and found it to be a fun and useful way to find out about different routes into a career in science. She said: “It was really fun and I really enjoyed it! I found it really useful to learn more, as I previously didn't know that universities offered many Apprenticeships and that another path, away from attending university, could lead to a good career in science.” 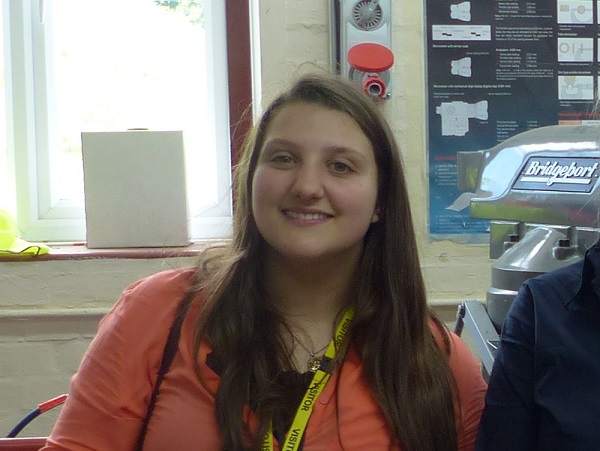 Oxfordshire Apprenticeships and the University of Oxford are getting together in early January to plan some similar events at other University departments. We were delighted with the level of interest from the female scientists of the future and are looking forward to some fantastic events in 2017!

Read more about the event in this article on the Dunn School of Pathology website.